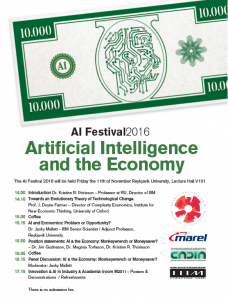 As artificial intelligence and extensive automation invade our daily lives, what are the implications for our economic systems? Can artificial intelligence help us with the grand challenge of the 10 hour work week promised at the beginning of the 20th century? Or will ever more automation in finance and production lead to the destruction of the very financial system that’s created them?

This will be the focus of this year’s AI Festival held Friday the 11th of November at Reykjavík University.

The keynote speaker at this year’s festival is Prof. Dr. Doyne Farmer who has advocated for reforms in economic research and theory: https://www.youtube.com/watch?v=7yUqM75SLIU

Dr. Farmer gained international fame in the 70’s for building an embedded shoe computer to successfully turn the odds of roulette against the house. He later used his mathematical knowledge to predict the financial market and formed a quantitative trading firm that was later sold to the United Bank of Switzerland.

IIIM Senior Research Scientist Dr. Jacky Mallett will also introduce her new economic software ‘Threadneedle’ which is a causal-relational agent-based simulation of the Icelandic banking system built to test the implications of different financial activity and regulations on banking, and its impact on the economy.

The AI Festival is held in collaboration with CADIA, Reykjavik University’s AI lab and is sponsored by Marel.

The program starts at 2 pm and concludes with an open exhibition of Artificial intelligence in industry and academia where attendees can enjoy a glimpse of some of the most advanced products, services, and research in the field of AI and high-tech in Iceland.

There is no admission fee and the festival is open to everyone. All lectures are held in English.

It will also be possible to live stream it here and all the lectures will be available on our YouTube channel afterwards.