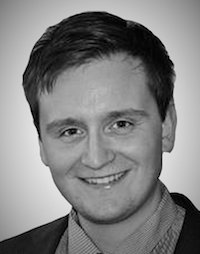 On February 17th this year the Icelandic newspaper DV published an interview with IIIM intern Thorbjorn (Tobbi) Kristjansson with the heading “Could mean the end of humanity if we don’t play it right”. The interview was about Mr. Kristjansson’s warning about the pitfalls of artificial intelligence (AI) technology. Following in his footsteps (metaphorically speaking, of course), last week the famed scienctist Stephen Hawking authored an article in The Independent asking us whether we are taking AI seriously enough. His article was triggered by the movie Transcendence, in which Johny Depp plays an AI researcher intent on creating “real AI” – machines that can really think and can rival humans in their intelligence. Like Tobbi, he warns that while real AI could be the most amazing thing humanity has ever accomplished, “it could also be the last.”

Like Hawking, IIIM takes AI seriously and wants to do something about it. So last summer Mr. Kristjansson undertook a study of the various risks of current and future AI, under the guidance of the IIIM’s Managing Director Dr. Kristinn R. Thorisson. The work, which earlier this year was one of a few projects out of over 200 considered for a nomination to the Icelandic president’s Student Innovation Award, is now providing an important backdrop for IIIM’s new Ethics Policy Regarding Funding Sources, expected to take effect later this year.

Says Hawking, “All of us should ask ourselves what we can do now to improve the chances of reaping the benefits and avoiding the risks.” Knowledge is, of course, power. And power can be used for good and for ill. At IIIM we continue to lead the world on this front, aiming to be the first AI-centric research institute to instantiate an institute-wide ethical policy aiming to set explicit guidelines for avoiding the various types of misuse of the technology it develops.