Last Thursday a special event and congress celebrated the results of three projects that received a grant from the Center of Excellence fund, established by the Technology & Science Board of Iceland in 2008. IIIM was one of the three projects selected from proposals authored by over 1000 scientists and entrepreneurs in Iceland. Among attendess of the Annual Innovation Congress were Iceland’s Prime Minister, Katrin Jakobsdóttir, and Lilja Alfreðsdóttir, Minister of Education and Culture.

The Annual Innovation Congress was organised by Rannis, Promote Iceland, The Innovation Centre Iceland and the New Venture Business Fund. The event focused on the results of the 2009 Center of Excellence Grant, which had the aim to promote research and innovation in Iceland, encourage collaboration domestically and in internationally, in industry and academia, and boost investment and the making of capital goods within research and industry.IIIM’s director, Dr. Kristinn R. Thórisson, presented the main results so far, which count numerous successful collaboration projects with industry, over 50 scientific published articles, more than 60 interviews, reports and news articles about IIIM and its work in outlets such as Popular Mechanics, Motherboard and The Age, numerous co-organized events such as the Reykjavik AI Festival, and several awards and honors.

Here you can view an IIIM’s introduction video with testimonials from a few of the institute’s collaborators: 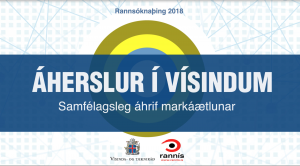