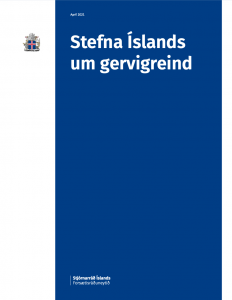 In October of 2020, the Office of the Prime Minister of Iceland assembled a five-person committee tasked with authoring an AI policy for Iceland. Part of the process included soliciting comments from the public. In March IIIM submitted a 14-page report advising the committee on the subject. The committee has now delivered a final report that resulted from its work, which outlines policy suggestions. The Prime Minister plans to present the report to parliament later this month.

The report, titled “Stefna Íslands um gervigreind”, describes three pillars on which the AI policy for Iceland shall rest. The first is that AI should be for the benefit of everyone. The report points out that there are many potential situations in which decisions made by AI systems may have ethical and moral implications, and suggests guiding values along with a framework for evaluating such circumstances.

To ensure the competitiveness of Iceland’s private sector, which is the policy’s second pillar, the report suggests methods for supporting and incentivising increased digitization of industry. AI technologies are capable of enabling solutions to complex problems that have previously been uneconomical to solve using manpower in countries with a low population.

The third pillar is education. A future of continuous education, local expertise in AI, and opportunities for adapting AI technologies to Iceland’s industrial needs, needs to be ensured.

IIIM congratulates the government on this new policy, which is an important milestone to ensure that Iceland can participate in discussions and collaborations with other nations on these issues.