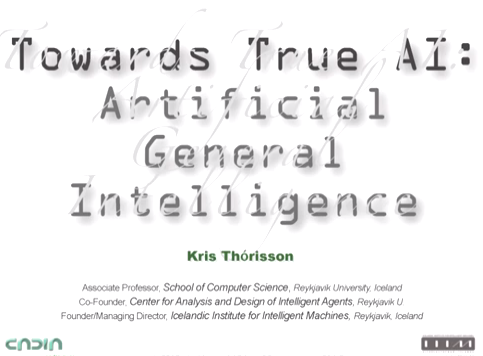 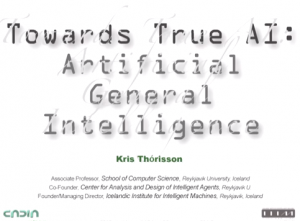 Dr. Kristinn R. Thórisson gave a talk on Artificial General Intelligence at IIIM’s and CADIA’s AI festival where he emphasised that truly intelligent systems will not be anything like the software we know today, for at least two reasons: Today’s software cannot “figure stuff out for itself” and it has no “life of its own” — since, whenever its environment changes even slightly, it relies completely and utterly on its designers to make things right.

In short, today’s AI systems don’t are not inquisitive and have little or autonomy to speak of. All AI systems today are created the way traditional software is created: By humans coding all of its functions and knowledge by hand. This will not work for creating real AI: to realize truly intelligent systems we need nothing less than a radically new approach to software development. In this talk Kristinn presented new methodological principles for achieving artificial general intelligence that address limitations inherent to current approaches, based on a a new programming language, a new programming paradigm, and a new realtime logic. He demonstrated the world’s first seed-AI system — a new architectural blueprint for generally intelligent cognition. The agent S1 implemented in this architecture can learn complex tasks such as natural language-based communication between humans solely by observation.

Dr. Kristinn R. Thórisson has been researching artificial intelligence for over two decades, in academia and industry. His research centers on realtime interactive intelligences, cognitive architectures, and sentient systems. At MIT he pioneered new ideas in the area of communicative, multimodal intelligent agents. Recent projects include developing a cognitive architecture for the humanoid robot ASIMO by Honda Motor Corporation. He is the co-founder of CADIA, Iceland’s first AI lab, and founder of the non-profit R&D center Icelandic Institute for Intelligent Machines (Vitvélastofnun Íslands ses), which he directs. He has taught advanced AI courses at Columbia University, KTH, and Reykjavik University, and consulted for NASA and British Telecom, among others. He has authored numerous scientific papers and sits on the editorial board of the Journal of Artificial General Intelligence and the LNCS Transactions on Computational Collective Intelligence. Kris is a two-time recipient of the Kurzweil Award. He holds a Ph.D. from the MIT Media Lab.